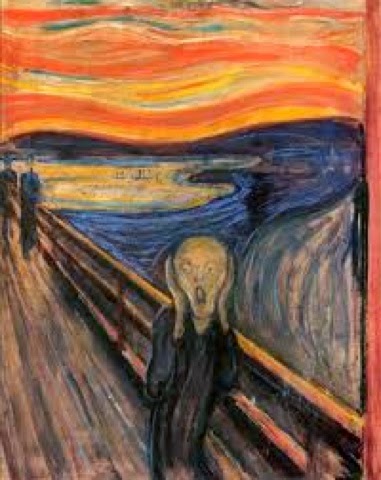 Gone With The Wind

I must have seen this many times before, but this time I really put my thoughts on it. I am referring to Edvard Munch’s painting titled ‘The Scream’. What it features is a woman on a bridge screaming in what seems like terror. The bold brush strokes and an intriguing portrayal of a moment frozen in time lends itself to myriad interpretations. What led to that moment? How did it go from there? What is the story?
‘The Scream’ is not the only one. There are many other paintings that leave us trying to read the story that a frozen moment speaks. Given that an art form such as painting or sculpture by their very nature are forced to portray a moment, it amazes me how these artists manage to tell a whole story in a moment!
As dancers we are far more fortunate.  We have ninety to one hundred and twenty minutes to tell the story behind ‘The Scream’. An amazing opportunity to present the what’s, why’s and what’s-next behind that moment. But what do we actually do?  We take one moment perhaps the scream itself and describe it for an hour and a half!  The mythologists would compare the scream to the baritone of Lord Shiva in some moment of rage. The Mahabharatha addicts would claim this was akin to Draupadi’s most famous moment. The environmentalists would probably talk of pollution and its effects on humanity. The more enterprising would cover all this and call it – ‘The Anatomy of a Scream’ and add many more allusions!  The contemporary artist would make obtuse references and possibly leave the poor screaming woman wondering why she screamed in the first place. In a nutshell ‘The Scream’ itself would become the content which by way of hundreds of examples would constitute the entire show.
This is just one example. Dancers frequently take one brief moment and describe it ad nauseum. The burning that Radha felt in the absence of her beloved Krishna would be described over twenty minutes, a waft of cool air – an experience you probably felt for ten seconds or less would be described for an hour in a production called ‘Vayu’ (Wind).
In fact, Vayu is a great example. All you need to do is have Vayu as cool mountain breeze felt by the lover in the arms of her beloved, as hot desert air signifying the parchedness of life in his absence, Vayu as the tempest signifying fury at her lover cheating on her, and so on and on – enough material to be called artistically different. I wonder if a kid in school can be taught the wind with these examples! Or whether the kid’s teacher is likely to give a score if she finds these in the answer book.
With over ninety minutes and a kinetic canvas, why would an artist or dancer restrict herself around one phenomenon?  Interesting art compresses a story to fit into an hour and a half by editing out the long portions of inaction that real life gives between the denouement of a tale. The idea of blowing up one moment into a hundred and fifty or more is a certain recipe for over statement and hyperbole.
The touchstone test again – would you go see a movie which spent three hours giving various examples of what wind is? Can we stop this masquerade on stage please.
0
0